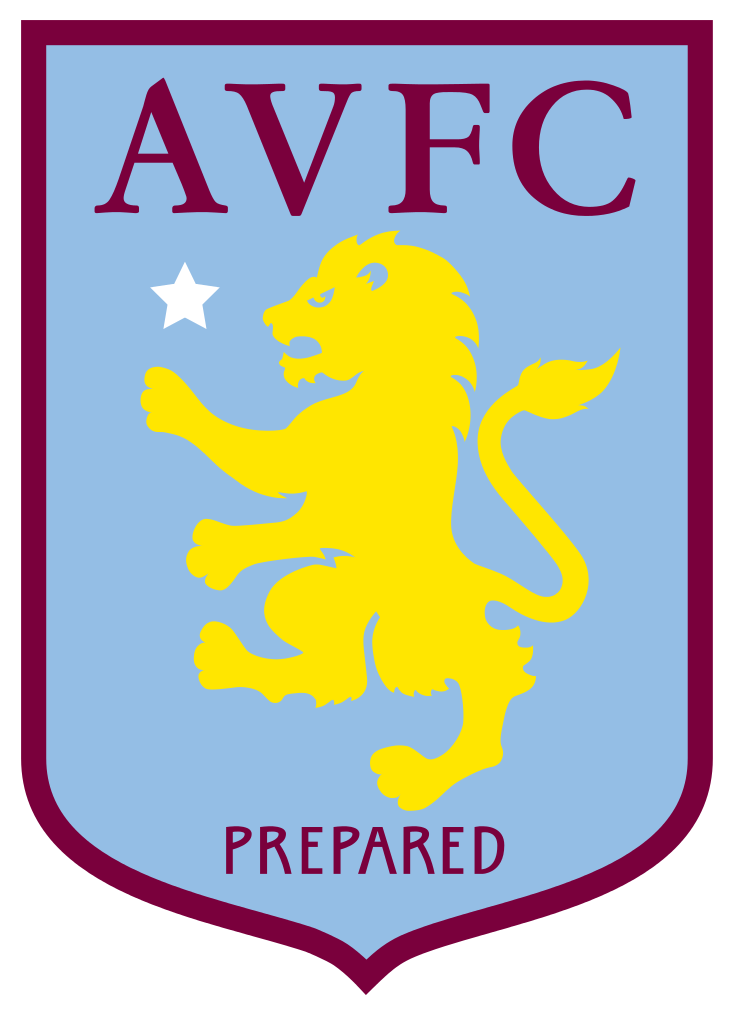 Aston Villa is one of the oldest clubs in English football. The club, which was founded in 1874, has seen all the highs and lows of English football. Aston Villa is one of the three clubs that were founding members of both the Football League in 1888–1889 and the Premier League in 1992–1993. Aston Villa was the league’s runner-up in both the Football League’s inaugural season in 1888–89 and the Premier League’s inaugural season in 1992–1992, which is a unique distinction of the club.

Aston Villa FC was founded in March 1874 by a group of friends who were members of the Villa Cross Wesleyan Chapel. Frederick Matthews, Jack Hughes, William Scattergood and Walter Price were the founders of the club, they were also the members of Chapel’s cricket team and were looking for a sport to play during the winter season.

In 1875, the team was practicing in Aston Park when a Scottish player George Ramsay visited the Aston Park and demonstrated his football skills. His close ball control impressed the Villa players, and when the practice was over, Ramsay was invited to join the club. He accepted the offer and soon became the captain of the team. Why not check out the latest Aston Villa news in our dedicated news section.

Ramsay served the club as secretary-manager for over 40 years starting in 1886 after helping the team win its first trophy in 1880. The club determined in 1885 that it needed a full-time, salaried manager. In 1886, a newspaper advertisement for the position of club manager was placed. The club received over 150 applications for the position, and George Ramsay was one of them. Ramsay, who is regarded as the world’s first football manager, was chosen to lead Villa. Read the latest betting odds premier league winner of 2022 – 2023 with the Football 24-7 guide.

During the extraordinary 42 years of his service as a Secretary-manager, Villa won the Football League and FA Cup six times each, solidifying their reputation as England’s top football team. Under Ramsay, Villa was famous for their quick dribbling, short passes, and strong shooting. At the age of 71, Ramsay left his position as secretary and joined the Club as a vice-president and honorary advisor. He remained in that role until his death in 1935.

Villa played with an extremely aggressive style of play with Ramsay incharge. The team started the 1886–87 FA Cup season with a 13-0 victory over Wednesbury Old Athletic, which stands as Aston Villa’s biggest victory to date. The team defeated Derby Midland by a score of 6-1 in the second round, and in the third round they had to play Wolverhampton Wanderers three times before winning by a score of 2-0. Aston Villa qualified for the Semi Final by defeating Horncastle by a score of 5-0 and Darwen by a score of 3-2 in the fifth and sixth rounds respectively.

Villa defeated Rangers by a score of 3-1 in the FA Cup Semi Final, advancing to their first FA Cup Final. West Bromwich, who were considered to be a title favorite, was the opponent for Villa in the championship game. Villa started the game on the defensive, but in the second half, Villa switched to an offensive strategy. Villa was able to maintain its dominance throughout the second half of the game thanks to an early lead of one goal at the beginning of the second half. Villa won the game by a score of 2-0 and won their first major trophy.

Aston Villa was one of the twelve founding members of the Football League in 1888.  William McGregor, the director of Villa, took the initiative and put forth the suggestion that clubs organize their own fixtures in addition to cup competitions. He suggested the establishment of a league competition in a letter to the committees of his own club, Aston Villa, as well as those of Blackburn Rovers, Bolton Wanderers, Preston North End, Stoke, and West Bromwich Albion.

The official announcement of the formation of the football league was made during a meeting on April 17, 1888, at the Royal Hotel. It was decided that every club would play every other club twice, once at home and once away, and two points would be given for a victory and one point for a tie. Aston Villa, West Bromwich Albion, Bolton Wanderers, Wolverhampton Wanderers, Burnley, Everton history facts, Blackburn Rovers, Notts County, Preston North End, Accrington, Stoke, and Derby County were among the twelve clubs that competed in the Football League’s inaugural season.

The Victorian era is regarded as the golden period of Aston Villa. By the end of Queen Victoria’s reign in 1901, the team had won five League titles and three FA Cups, making them the most accomplished English club of the Victorian era. In 1901, Villa also introduced a fixed wage system for the professional football players which was also adopted by other clubs. Read some useful Man Utd facts or the footballers when they were young resources today!

The club’s relative decline started in 1926, the year Ramsay left. After George Ramsay retired in 1926, Billy Smith took over as manager, but Smith was unable to maintain Ramsay’s success. Smith gave it his all, but he was unable to bring the team any titles. Villa generally finished in the middle of the league table in most of the seasons during the 1930s. The club’s greatest season under Smith was 1932–1933, when it finished second in the standings, four points behind league champion Arsenal.

Despite having a successful season in 1933, Villa again struggled in the league and placed 13th in the following two seasons. To avoid relegation in 1935, the club made seven signings and spent more than £35,000, but they were unable to maintain their top-flight status and were relegated from the Football League for the first time in 1935-36.

The Second World War had an impact on Aston Villa, just like it did on other English teams. Several players left the team due to premature retirement. Under Alex Massie’s management, Villa began rebuilding its team after the Football League’s revival in 1945 and added a number of fresh players. After 37 years without a trophy, the club won their seventh FA Cup title in 1957. Read the latest Championship transfer news with Football24-7 today!

Villa won the Second Division in 1960 and was then promoted to the top division. Villa shocked everyone the next year by winning the inaugural Football League Cup, currently known as the EFL Cup. Villa became the first team to win the Football League Cup after defeating Rotherham United 3-2 on aggregate in the final. The success couldn’t last longer and the club again got relegated to the Second Division in 1967.

Relegation to the Third Division and Subsequent Resurgence

Things got even worse for Aston Villa by the end of 1969-70 season when the club was relegated to the Third Division. The fact that one of the most well-liked and prosperous clubs in English football was demoted to the lowest league came as a shock to the supporters. Unexpectedly, Villa displayed exceptional performance in the League Cup 1971; the team upset Manchester United 3-2 on aggregate in the Semifinal to get to the Final, where they lost to Tottenham Hotspur. Read more on the latest Brighton transfer news and the english championship top scorers for 2022.

Villa won the Third Division title in the 1971–1972 season, earning them promotion to the Second Division. Villa earned promotion to the First Division and qualified for the UEFA Cup in 1974–75 after finishing second in the league standings. In 1980–81, Villa won its seventh top-flight league title, ending a span of 71 years since their last Football League triumph. In the same season, Villa also won the European Cup now known as the UEFA Champions League for the first time.

Aston Villa in the Premier League

Along with Blackburn Rovers and Everton, Villa was one of the three clubs that were founding members of both the Football League in 1888 and the Premier League when it was established in 1992. In the first season of the Premier League, Villa finished second on the league table and earned qualification for the UEFA Cup 1993-94. Villa won two more league Cups in 1993–94 and 1995–96. Why not read the latest  Liverpool FC facts and the latest Manchester city facts archives on Football 24-7.

Villa placed bottom in the league during the 2015–16 season and was demoted to the Football League Championship. Villa bounced back quickly and earned a spot in the Premier League in the 2018–19 season via EFL play-offs.

Being one of the oldest football clubs in English football, Villa is a valuable asset in the Premier League. The sources claim that the club has a current market worth of $144 million and generates an impressive $18.7 million in revenue annually. The club’s 55% ownership was purchased for £60 million in 2018 by two billionaires, Wesley Edens and NassefSawiris.

NassefSawiris and Wes Edens, the owners of Aston Villa, are ranked fourth in terms of wealth among Premier League owners by Forbes. Both have a combined net worth of over $12 billion. The two billionaires have invested a sizable sum of money in Villa to help the team to earn promotion to the Premier League in 2018.

Aston Villa’s major rival club in the premier League is West Bromwich Albion. Their stadiums, Villa Park and The Hawthorns, are just four miles apart and located in the West Midlands. The contest between them is referred to as a “West Midlands Derby.” The rivalry between the two teams may be brought on by the fact that both clubs are local and were among the founding members of the Football League in 1888. Check out the latest WBA news 24 7 today with Football 24-7.

The local rivalry became more intense in 1887 when both sides met in the FA Cup final. Villa defeated West Bromwich by 2-0 and won the FA Cup for the first time. In the 144 matches the two sides have played so far, West Bromwich has won 47 times, Villa has won 69 times, and 31 games have ended in draws. Villa has won 22 major trophies, whilst West Bromwich could only have won nine. This makes Villa a more successful club as compared to the Baggies. More West Bromwich Albion transfers news is available to read today.

With several First Division, FA Cup, and League Cup victories in its early years, Villa was one of the most successful teams in English football. They are also one of only five English clubs that have won the European Cup (now known as Champions League). Aston Villa has won 25 major trophies including 7 Football League titles, 7 FA Cup titles, 5 League Cups, and 1 European Cup. Below is the complete detail of major trophies and titles won by Villa.

The Official Website for Aston Villa Supporters is: http://www.avfc.co.uk/

The Contact Details for Aston Villa Football Club are as follows: