Brighton & Hove Albion was established and founded in 1901 and the club nickname is The Seagulls. 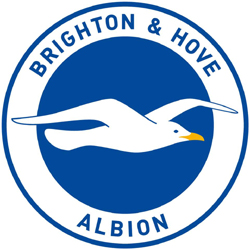 The Brighton & Hove Albion football club is based on the south coast of England, which is known for its sun, beaches, and seagulls. In their long history, the club has had many ups and downs. The club has accomplished a lot with a small budget and big expectations. With so much history and culture, it is one of the oldest football clubs in the United Kingdom. The team hasn’t had much success at the highest level of football, either in local or European competitions, but the Seagulls still have a large fan base throughout the world.


Brighton and Hove were once two separate towns that have now merged to become a single city. It is situated on England’s south coast, in the county of Sussex. In 1897, Edgar Everest, former official of Sussex Football Association, founded Brighton United FC. The club only lasted three years before shutting down in 1900. Another football team called Brighton and Hove Rangers was founded in 1900, but it barely lasted a year.

In 1908, the club hired Jack Robson as their new manager, who restructured the club and made significant changes in the squad. In the 1908-09 season, the club couldn’t display a significant performance in the league and hardly avoided relegation by finishing at 18 place in the table. Robson realized that he needed to hire quality players to progress in the league.

The club made a few notable signings at the end of the league season. After spending seven year in the First Division of the Southern League, Brighton won their first Southern League title in 1910. The club performed outstandingly throughout the league, and won 23 matches during the league. The Seagulls defeated their rival Swindon Town on 23rd April to secure their first league title.

In the 72nd minute of the game, Brighton striker Charlie Webb scored the game’s only goal. It was the first and only occasion a Southern League champion won a national honour. The FA Charity Shield title in 1910 is the only national honour of the Seagulls to date.

Promotion to the Football League for Brighton FC

Brighton earned a reputation as a giant-killer in the league, defeating First Division sides Everton, Chelsea, Sheffield United, Portsmouth, and Leicester City in front of an enormous crowd. In the 1957-58 season, the Seagulls won the Football League Third Division and were promoted to the Second Division. Brighton was the only professional football team from Sussex in the Football League from 1920 to 2011.

Goldstone Ground – The club played at County Cricket Ground for only a year after its inception in 1901, before relocating to the Goldstone Ground in 1902. The Goldstone Ground served as the home of Brighton & Hove Albion for the next 95 years. The stadium was put up for sale in 1997 by the board of directors.

Withdean Stadium – Following the sale of the Goldstone Ground, the club shared Priestfield Stadium with Gillingham FC for a while. The team returned to Brighton in 1999 to play at Withdean Stadium, which served as the club’s home for the next 12 years, from 1999 to 2011.

Falmer Stadium – the stadium is located in Village Way, Brighton. It is also known as American Express Community Stadium, Amex Stadium due to sponsor reasons. Brighton FC shifted to Falmer Stadium in 2011 and it is the home of the Seagulls to date. The stadium has a seating capacity of 31,800.

Brighton and Hove Albion was founded in 1901 by Edgar Everest, former official of Sussex Football Association. In 1972, a British businessman Mike Bamber became joint chairman of the club. He made few significant changes in the management of the club and brought Brian Clough and Alan Mullery to the club. Bamber helped the club to get promotion to the First Division in 1978.

In 1997, the club faced a turbulent period when a financial crisis brought the club near bankruptcy. The club was at the bank of losing its football status. An English businessman Dick Knight who was a lifelong fan of Brighton & Hove Albion, took control of the club in 1997. He not only paid the club’s debt but also restructured the club’s management.

The current chairman of the club, Tony Bloom took over the club by purchasing 75% of the club shares in 2009. Bloom provided £93 million funding for the new Falmer Stadium of the club. In 2011, Brighton had a home stadium of their own.  In the 2016-17 Championship season the club performed well and was promoted to the Premier League for the first time.

Tony Bloom, the current chairman of Brighton & Hove Albion, is widely regarded as one of the best club owners in English football. He has been a lifelong admirer of the club and has amassed millions of pounds in the gambling sector. As a chairman he invested his vast personal wealth into the club. According to the club sources, Bloom reportedly invested around £350 million in the club’s Amex stadium and playing side.

According to the club’s statistics, Brighton & Hove Albion Football Club’s net value in 2022 is $1.2 billion, with an annual revenue of $433 million and a gross profit of $213 million. Brighton & Hove Albion’s valuation has continued to rise due to their promotion and tenure in the Premier League.

Every Premier League club has a long-standing rivalry with its neighboring clubs. Brighton is located in East Sussex, and the club lacks a major professional team in the area, resulting in the lack of a well-established local derby. On the other hand, Brighton’s matches against south coast clubs such as Portsmouth and Southampton, are occasionally referred to as local derbies by the media, but there is no established rivalry between supporters and teams.

Crystal Place is the nearest club to Brighton in terms of distance, at a distance of roughly 64 km. Both clubs have an unofficial rivalry, which could be the result of a feud between Brighton manager Alan Mullery and Crystal Palace manager Terry Venables in 1976. Despite the fact that this rivalry is not formally recognized by the media, both clubs face each other with aggressive approach.

Home and Away Kits

Nike has been producing the club’s kit since 2014. The away kit of Brighton & Hove Albion has a mint green shirt with the club’s logo, American Express sponsorship, and a black Nike logo, as well as black shorts. Third kit of the club has a yellow shirt with blue shorts. Check out the Brighton FC Mascot pictures taken by the Football24-7 team.

Between 1948 and 1970, the club was using two badge logos, one representing Brighton and the other representing Hove. In 1974, a new logo with a dolphin theme was introduced, and the club’s nickname was changed to the Dolphins. The club’s management modified the design again in 1998, this time to a circular seagull crest, which remained the club’s logo for the next 20 years.

The most recent logo of the club has a white seagull with a yellow beak. The logo has a blue background with a white round border. The club’s name is written on the white round border. This logo was designed in 2011 and has been in use ever since. Fans love the simplicity and elegance of this logo. Take a look at some other Brighton Football Club pictures taken by our team.

In 2014, the club built a state-of-the-art training and teaching facility in the club academy, known as American Express Elite Football Performance Centre. The club was awarded category one status in 2014, showing that the club has one of the best elite football facilities and opportunities for young players.

The club’s performance facility contains 11 pitches of various sizes, including an indoor half-size pitch, ensuring that the club’s players and staff may use the facilities in a variety of weather situations. There are also medical treatment facilities, a gym, and a swimming pool inside the site.

Brighton also promotes its academy players by providing them opportunity to play professional football to gain experience. The reserve team of the club is made up of under-23 players, and they play in the Premier League 2 Division 1 which is the highest level of reserve team football for the English clubs.

In 1997, Brighton met Hereford in a league match, which was one of the most fascinating moments in the club’s history. Both teams needed a win to escape relegation to the lower tier. During the encounter, Hereford scored early in the first half, but Robbie Reinelt scored an incredible goal for Brighton in the second half, and the match ended in a draw. On the basis of table points, Hereford was relegated. The goal is considered as Brighton’s most fortunate goal in history.

When John Keely, the goalkeeper for Brighton, was injured, his replacement, Perry Digweed, started playing league games. Due to traffic, Digweed was once unable to reach the stadium for a match. John Keely was in a local pub in Hove near the Goldstone stadium at the time. He got picked up from the pub in order to take part in the game. Keely played the game despite his injury.

The New Zealand Football Association has a special relationship with Brighton & Hove Albion. The Goldstone hosted a friendly match against the New Zealand national team on February 10th, 1992. It was the first time a national team faced the Seagulls in a match. The game finished with a 2-0 victory for Brighton.

In 1983, Brighton qualified for the FA Cup final. Although it was the club’s most crucial match, three of the major team members were unable to compete in the final due to various reasons. Terry Conner was on loan at Leeds United, goalkeeper Perry Digweed was sent off in the previous game and was suspended for the FA Cup final, and Captain Steve Foster was also suspended for the final owing to disciplinary issues.

Brian Powney, a former goalkeeper for Brighton & Hove Albion, was also a rugby player. He played rugby for a local club while simultaneously playing football for Southwick, a non-league team.

In a match against Birmingham City in 1988, Albion goalkeeper Digweed collided with the Birmingham striker by accident. Digweed suffered the most serious urethral injury. Digweed spotted blood running out his crotch after receiving first aid at the pitch. He bolted from the pitch while the game was still in progress.

Brighton, although being one of England’s oldest clubs, has never had any success in the Premier League. Their only national honour till this date is the FA Charity Shield, which they won in 1910. Although he has won a number of lower-tier football championships, he still needs to win major titles such as the Premier League and European competitions. The full list of trophies and titles won by Brighton may be found here.

The Brighton & Hove Albion Club Address is as follows:

The Official BHAFC Twitter page can be found here