In the build up to England’s Nation League match with Belgium, Man City midfielder Kevin De Bruyne, who plays for Roberto Martinez’s men, claimed that the Three Lions are serious contenders for the European Championships when they get underway next summer.

The betting odds tend to agree but do they represent value? Here we look at whether England really should be touted as potential winners. 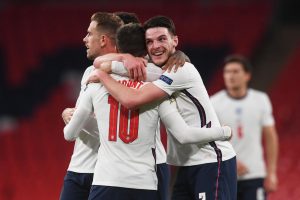 Say what you want about Gareth Southgate as manager but he’s the first coach for 20 odd years that actually displays a strategy of how he wants to play the game. Under past managers England have looked devoid of ideas. They’ve lacked energy, there has been no patterns in the way they play and key players for their clubs have been shoehorned into the side because of who they are.

You cannot level those accusations at Southgate. From his appointment back in 2016, he’s provided a clear pathway for youngsters and they’ve become the mainstays of his team. He also nailed his colours to the wall pretty early on around how he expected his side to play out from the back and control matches. That is something England had lacked for a long time. Do England always manage to dictate games? No. They always try to play though and their identity as a team is clear.

When it comes to the attacking side of the game, England are well stocked with talent. On the goal scoring front just look at the names who will, barring injury, be in the squad. Leading the line is the crown jewel of Harry Kane with Raheem Sterling, Jadon Sancho and Marcus Rashford all options around him.

Throw into the mix that you then have the likes of Danny Ings and Dominic Calvert-Lewin adding depth to the attacking ranks and the prospect of scoring goals shouldn’t be a problem. There is more to attacking than just putting the ball in the net though and the speed of Rashford, Sancho and Sterling on the break is something that will terrify every back line in the world.

Struggling against a low block

During qualifying, England scored 37 goals in their eight matches, which made them the joint second (with Italy) most lethal team behind Belgium. Despite that, a look beyond the stats will show you that Southgate’s men lack a real creator in their side. The pace we’ve already mentioned is a tremendous weapon but it’s more effective against better, more progressive teams.

When teams sit deep and leave little space in behind England’s biggest threat is limited. The result, particularly if they don’t find an early goal, is a lot of possession but very little probing. There is one name that springs to mind who might help in these situations – Jack Grealish.

He’s impressed in his two caps so far, but Southgate seems unconvinced. Given the former Middlesbrough boss has spoken that some spots in his squad are still up for grabs, you’d have to assume that Grealish is one player who is far from nailed on to be on the plane. If he isn’t, England have missed an opportunity to cover a blatant weakness in their ranks.

Again, you might easily overlook England’s fragility at the back if you focus your research purely on statistics. Romelu Lukaku’s penalty in the 16th minute on Sunday was the first goal England had conceded in over six matches. The defence is not remotely impenetrable though.

Trent Alexander-Arnold is the first choice right back – or wing back depending on the system deployed – but his best qualities all lay with his attacking exploits. The same can be angled at Ben Chilwell on the other side. Then you have the centre backs. Harry Maguire is the dominant figure. To be fair, he has never let Southgate down but anyone who watches Premier League football will know his form is a big concern.

Alongside him, you’re probably looking at Eric Dier and Joe Gomez if everyone is fit. Gomez is arguably the best defender in the squad but even he is perhaps better in possession than out of it. Then you have Dier.

The Tottenham man has good parts to his game, and you’d expect his defensive capabilities to improve under his club manager, Jose Mourinho. That said, you still watch him expecting an error, which is exactly what happened against Belgium when he conceded the spot kick.

Considering Aston Villa are currently in a tremendous form, with 4 wins in 4 games, only having suffered 2 goals, don’t be surprised if Mings is named for the squad.

The defence isn’t calamitous, but it is an area that could well cost the team when up against top quality attackers in the latter stages.

A keeper that doesn’t inspire confidence

We’ve already touched on a defence that is anything but fearsome but the keeper behind them needs to take some of the flack for that too. Jordan Pickford looks like the nailed-on number one such is his ability to use his feet to good effect. The Everton keeper is very good in that regard, but he leaves you watching through cracked fingers every time crosses come into the box.

He’s made several errors leading to goals (11) for Everton over the past couple of seasons. He hasn’t cost England in the same manner, but it feels like a matter of time and he’ll certainly be targeted by teams who see him as a weak link.

So, there you have it, England in a nutshell. Are they European contenders? Their attacking options suggest they could be but they’re not close to being the finished article and, without bias, they shouldn’t be labelled favourites ahead of the tournament.